Often called as India’s ‘Fashion Queen’ and the ‘First Lady of Fashion’, Ritu Beri has created her own niche with her designs not only nationally, but internationally too. The Delhi-born fashion designer slowly rose to fame and received various honorary awards for her unique fashion designs. But she was most excited when she got hitched to her long-time friend and Delhi-based industrialist, Bobby Chaddha on November 24, 2004.

“It’s better than my dream wedding actually. I am very happy, it’s different, and it’s like a party.”

The bride wore self-designed rose pink lehenga with intricate golden embroidery on her big day. The couple have a beautiful daughter, Gia, who was born in August 2007. Daughter of renowned actress Neena Gupta and cricketer Sir Vivian Richards, Masaba Gupta is a well-known fashion designer who rose to fame in no time due to her different, fresh and unique designs. Masaba tied the knot with film producer Madhu Mantena in a court marriage on June 2, 2015. The designer wore various pretty outfits on her four-day long wedding celebrations, but she stole the limelight on her sangeet ceremony attire. Masaba looked gorgeous in the pink Banarasi lehenga by Sanjay Garg’s label, Raw Mango. Minimal jewellery and makeup made her whole look jaw-dropping stunning. 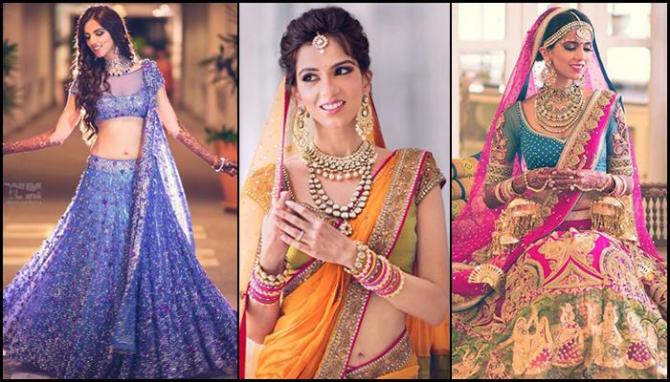 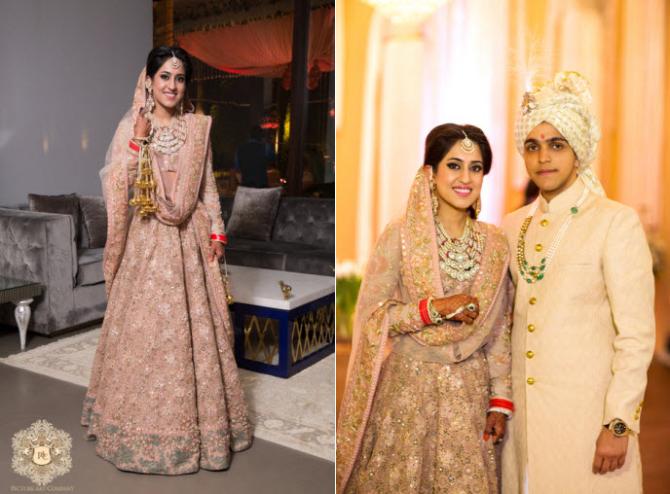 After starting her label, ‘Ridhi Mehra’, in 2012, the designer soon became a favourite for many Bollywood stars. The designer got married to Akshay on Feburaray 14, 2015 at Chattarpur Farms, New Delhi. It was a love marriage for the beautiful couple. Their parents met, and decided to go ahead with the wedding. It wasn’t arranged, it was a love marriage! Wearing a powder pink lehenga by her “dream designer Sabyasachi Mukherjee”, the bride truly looked like a princess on her big day. Minimal makeup and vintage Maharani jewels added the extra oomph factor, making her complete look absolutely flawless. 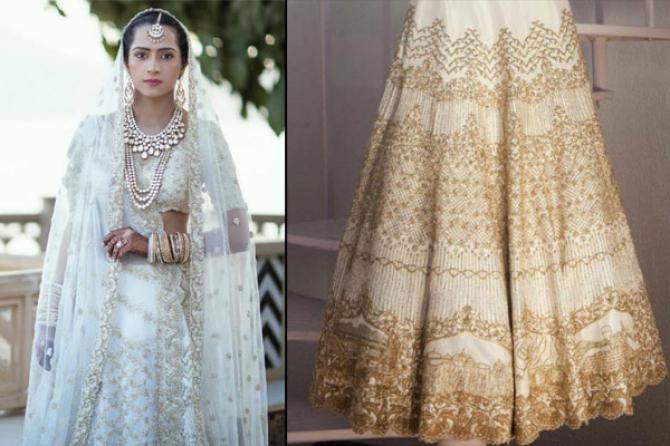 After getting inspired by ‘The Real Housewives’ star Adrienne Maloof’s dress, Mumbai based designer Kresha Bajaj decided to carve her and her fiancé Vanraj Zaveri’s love story in her gold and ivory lehenga wedding ensemble and the result was one epic bridal outfit. The couple got hitched in 2016 in Leela Palace, Udaipur. Kresha said:

“As I knew my wedding lehenga would be something I would only wear once, I decided to make it a piece of artwork that I would later frame. In order to make it into a special piece of art, I decided to embroider my entire lehenga with Vanraj and my story—our milestones, the proposal, and all our important moments up until the wedding. I used traditional embroidery techniques and materials, and all around the lehenga you will see hidden elements sewn into the garment. Our names are embroidered into the garments, pictures of our story framed with embroidery and finished with a hem of jumping dolphins, which was the beginning of our story as we worked together on a protest against cetacean captivity.”